Our top priority is the safety of our customers and our teammates!   Contactless rentals are available online or via phone!

Skip to content Skip to navigation Skip to toolbar

Within the last 1o years North Carolina has become one of the country’s hottest destinations. Indeed, if you were to take a survey of the populations of Raleigh or Charlotte you would most likely find that the majority of its residents are transplants, either from northern states like New York or New Jersey, or from the West Coast in California. Why is that you might ask? Numerous reasons really. For one, North Carolina strikes balance with its climate, and offers Northern transplants respite from the harsh winter conditions they have grown accustomed to up north. This favorable climate is further highlighted by North Carolina’s varied geographical features – along the coast you will find pristine and remote beaches, while venturing inland will lead you to discover the majesty of the Blue Ridge Mountains along the Appalachian Mountains range. Couple this favorable climate – and the recreational activities it provides – with an explosive job market and lower cost of living, and you will see that it is no surprise this state has become a favorite new home to Northerners across the country.

Charlotte embodies this concept in its core, offering its residents a thriving job market coupled with lower cost of living, favorable weather throughout the year, and all the amenities and activities typically associated with a larger city. Read SafeNest Storage’s guide below to learn of 3 reasons you might want to consider moving to Charlotte NC! 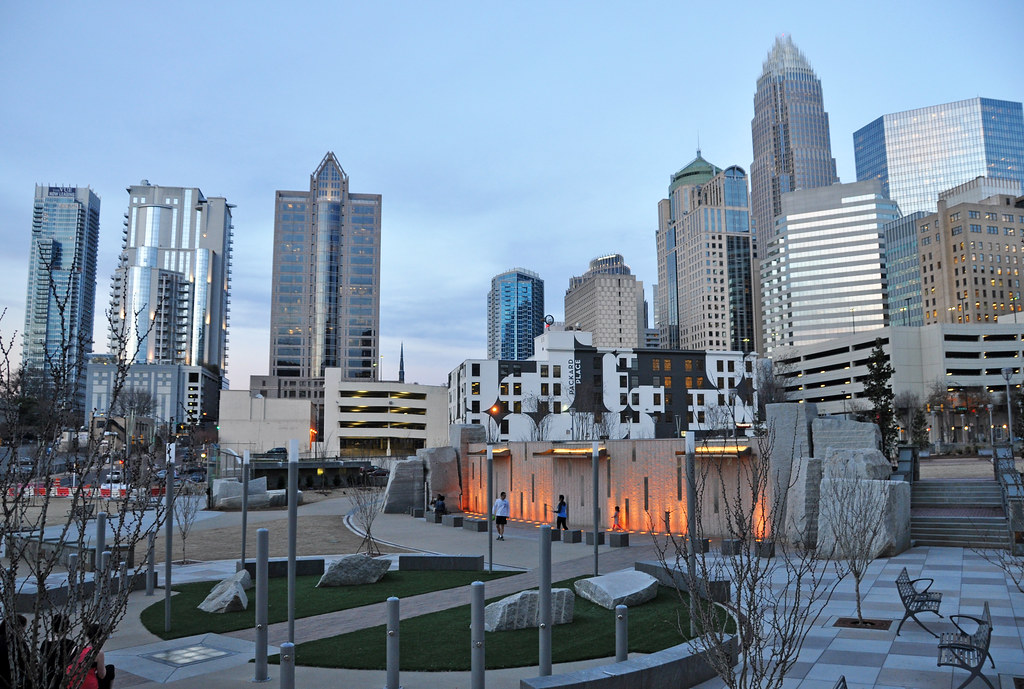 Charlotte – or the Queen City as its known – is North Carolina’s most populous city, and its robust and thriving job market certainly holds up to the city’s stately nickname. Uptown Charlotte acts as the central business district of the city, and is split into four wards containing over 28 million square feet of office space, and features theaters, hotels, high-density residential developments, and a high concentration of restaurants and nightspots. Notably, several Fortune 500 businesses are headquartered within this district, including Bank of America, Duke Energy, Honeywell International, and the east coast operations of Wells Fargo.

Economically, a large portion of Charlotte’s success can be attributed to its global accessibility. International businesses like the aforementioned Honeywell flock to Charlotte due to the city’s low corporate tax rates, and a competitive and affordable cost of living that provides flexibility for business innovation, relocation and expansion. The close proximity of Charlotte Douglas International Airport further supplements the city’s global business appeal. Indeed, Charlotte Airport’s position along the East Coast allow it to serve as a transitional hub of sorts, connecting major Midwest markets such as Chicago and Texas to influential international business markets in Europe and Asia. Moving forward, Charlotte looks to maintain its prominence as a influential market for international business – this thriving economy should be taken into consideration by any individual considering moving to Charlotte NC. 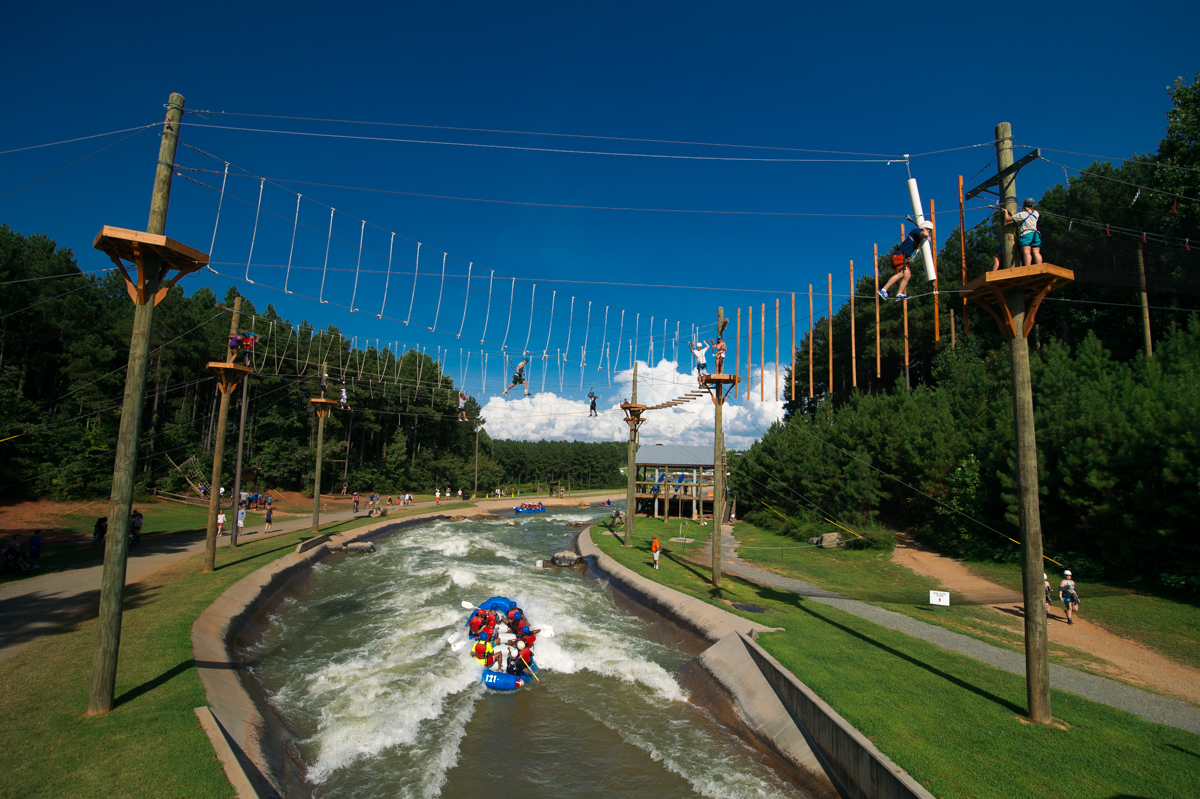 Previously discussed, Charlotte – and North Carolina as a whole – has become inundated with transplants from Northern states looking to settle within an area with an abundance of job opportunity, but also featuring a more favorable climate in comparison to the harsh winter conditions of the North East. Charlotte meets this criteria with its spectacular weather year-round, and consequently, numerous outdoor attractions exist surrounding the city’s center to take advantage of the area’s warmer climate.

Thrill seekers and dare devils alike can delight in Charlotte’s newest attraction, the U.S. National Whitewater Center, a facility opened in 2006 that features more than 30 different outdoor attractions positioned throughout 1300 acres of protected land surrounding the Catawba River. Primarily, as its name suggests, the center is largely composed of artificial whitewater channels divided into 4 sections of varying difficulty. Both kayakers and rafters can work their way through sections ranging from Class II, to the less forgiving Class IV rapids most frequently used in competitions held throughout the year. Additionally, the facility features numerous land and aerial activities including rock climbing, extensive mountain biking trails, and a circuit of skybridges containing obstacles and zip-lines. Overall, the US National Whitewater Center is massive – expect to spend several days exploring this attraction. 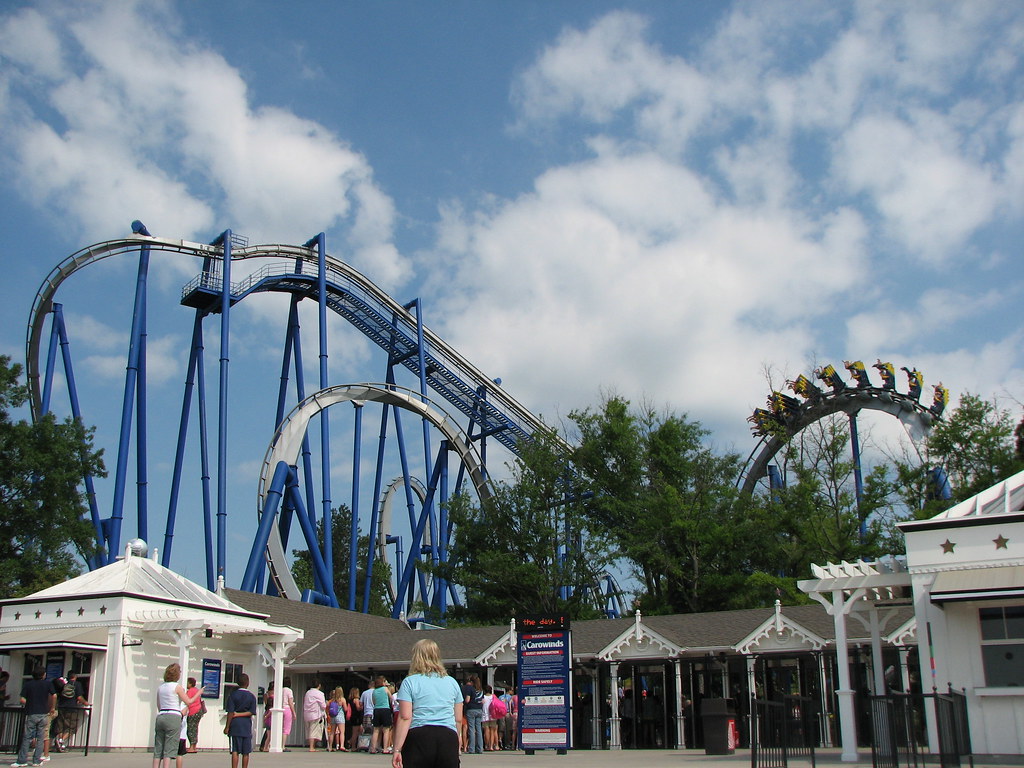 Carowinds by jthompson lic CC BY 2.0

Alternatively, if you’d rather stay on land, Carowinds amusement park located along the North Carolina-South Carolina state line offers thrills and excitement year-round to the Charlotte area. The park was originally opened in 1973, and since that time has gone through numerous ownership changes, but one thing has remained consistent throughout – the park is the Carolina’s largest collection of thrill rides. This park features numerous rollercoasters, live performance venues, kids attractions, and a water park with dozens of slides. Be sure to check out the park’s calendar before you visit – Carowinds schedules fireworks and kids friendly performances on a weekly basis throughout the summer. 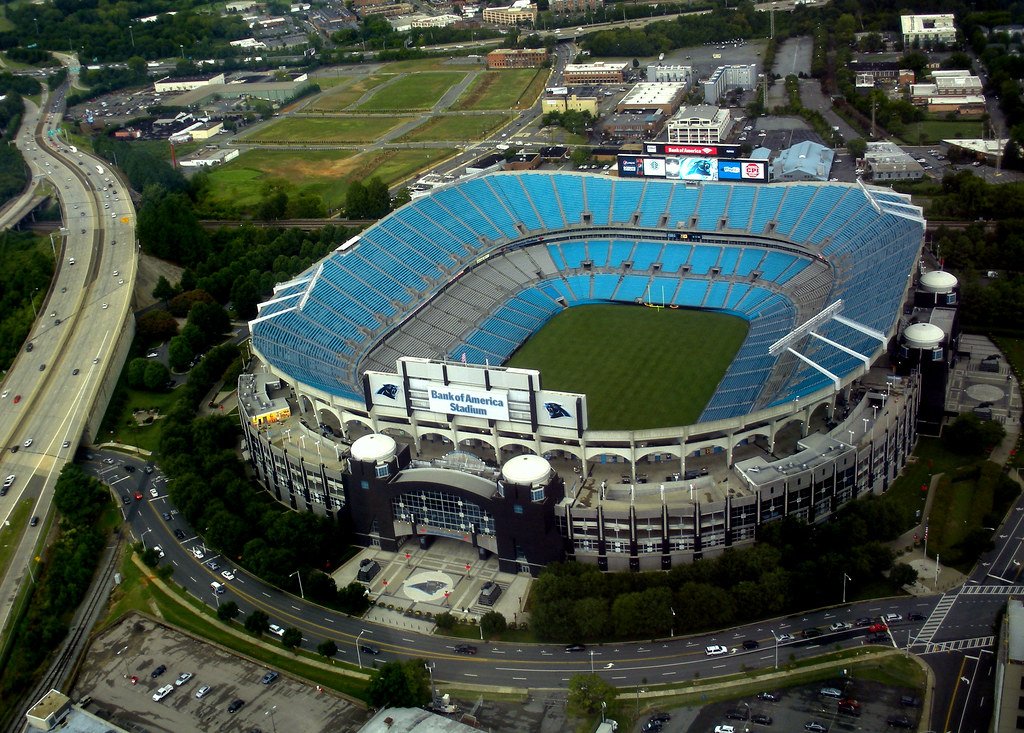 Bank of America Stadium by stremmel lic CC BY 2.0

Demographically, Charlotte is a young city. In fact, its largest age group is from 20 to 44, and the city appeals to this younger age group with its selection of professional sports teams, and a deeply embedded historic athletic spirit. Readers of this guide should be familiar with the Carolina Panthers, a team that was successful in reaching the Super Bowl as recently as 2016 and plays out of the Bank of America Stadium in uptown Charlotte near the heart of the city’s downtown. Additionally, beginning in 2022, the stadium will be home to a newly created MLS expansion team, the Charlotte FC, whose recent approval was secured via extensive stadium renovations and a sizable contribution from the Charlotte city government. Travel several blocks south, and you will find Charlotte’s final professional sports team – the Charlotte Hornets; a team owned by regional legend Michael Jordan playing out of the Spectrum Center in downtown Charlotte. 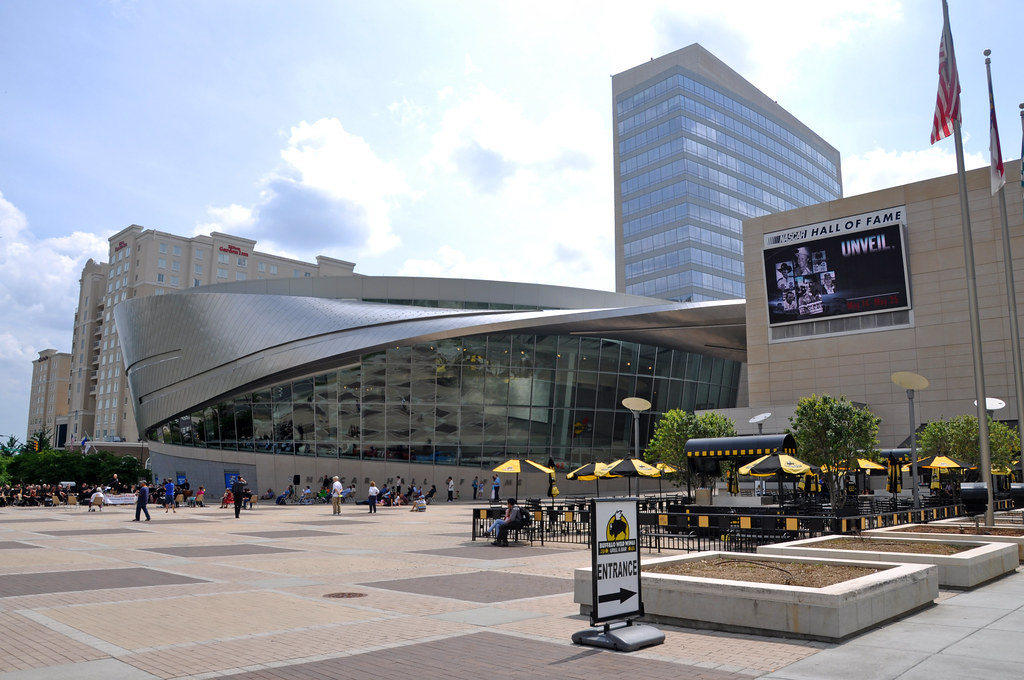 Alternatively, beyond live sports, Charlotte is notably home to the NASCAR Hall of Fame. Historically, stock car racing has deep roots in the Carolina area. Indeed, North Carolina speedways hosted 30 races of the total 52 races in NASCAR’s inaugural 1948 season, and this deep-seated historic influence was no doubt taken into consideration when choosing Charlotte as the host of the hall of fame in 2010. This modern and high-tech venue features artifacts and interactive exhibits designed to education and entertain fans, as well as to pay homage to the sport’s pioneers and its  storied history. Fittingly, in 2011 stock car racing became the Official State Sport in North Carolina – this announcement further cements the state’s standing as one of the godfathers of NASCAR within the US.

Notably, each venue previously mentioned is positioned in the heart of downtown Charlotte. This decision has allowed Downtown Charlotte to flourish, and has ultimately contributed to a revitalization of the area, as trendy restaurants, hotels, and nightclubs have emerged to meet the needs of the crowds gathered to the arenas. Consider planning an overnight trip to an event, and stopping at one of Charlotte’s newest hotspots. New favorites include:

Whatever your mood, Downtown Charlotte is sure to provide for a memorable night.

Self Storage in Steele Creek

As seen, Charlotte is a veritable playground of the South – the city offers an abundance of job opportunities, favorable weather, and all of the excitement that a bigger city has to offer. Considering making the move? Look no further than SafeNest Storage in Steele Creek.

SafeNest Storage in Steele Creek aims to be the best storage selection in Charlotte NC. We offer a range of sizes, so you can acquire up to 324 square feet for your largest projects or stick with a smaller storage unit for cost-efficient seasonal storage. Our storage facility can also house your vehicles if you have extra cars or recreational vehicles sitting around your property. We have outdoor parking spaces in both covered and uncovered options. Your boats and RVs will be secure at our Sam Neely Road facility, and you can easily access your items whenever you wish. Store residentially or commercially to start organizing your Charlotte NC space.

Rent or reserve the self storage you need online!